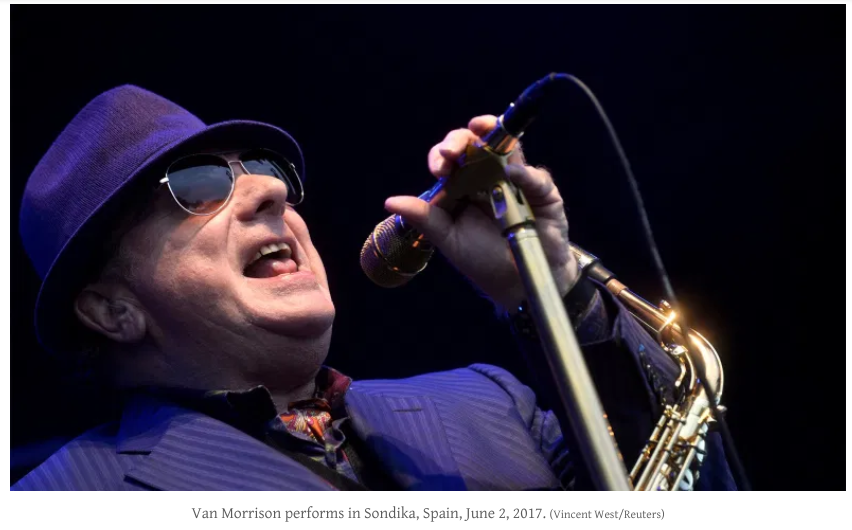 By ARMOND WHITE
Published in The National Review

Van Morrison knows what censorship means even if Internet mobs don’t. He has released three new songs, “No More Lockdown,” “As I Walked Out,” and “Born to Be Free,” that movingly speak against the new autocratic culture that too many people — especially trusted media figures, particularly left-leaning pop artists — accept without flinching.

The hysterical social-media response castigating Morrison’s compassionate new music (a fourth song, “Stand and Deliver,” is promised) only proves his point: We are deep into a second wave of undemocratic submission. It’s taken such a strange turn that Twitter thugs set out to rewrite cultural history, denying Morrison’s expressive genius in songs such as “Gloria,” “Brown-Eyed Girl,” “Domino,” “Moondance,” “Into the Mystic,” and the masterpiece albums Astral Weeks and Irish Heartbeat. The hecklers are trashing his musical legend (“He was never any good!”) merely to explain their own unease. Morrison’s anti-lockdown songs — his freedom songs — disturb their willing obedience to political authority.

COVID conformity also overwhelms many people’s instincts when politicians use fear as a tactic of mind control. Morrison, whose most fascinating work creates a musical vocabulary expressing his personal relation to Christianity and his ongoing spiritual search, sees pandemic panic for what it is and counters the fear of death that grips our secular society. It has become a weapon of the media elite, instilling a perverse desire for political domination, so Morrison makes the most political — and potentially popular — music of his career, hoping to spark his listeners’ life-affirming instincts.

“No more threats,” Morrison proclaims on “No More Lockdowns.” In the lost tradition of the Beatles’ “Revolution,” Morrison finds means to oppose status-quo quasi-liberalism: “No more celebrities / Telling us what we’re supposed to feel.”

Morrison’s rebellious sermon continues: “No more government overreach / No more fascist police / Disturbing our peace / No more taking our freedom and our God-given rights,” and it sounds inspired. The gospel piano and organ juking strike a universal chord, furthered by Morrison’s distinctive moan, the sound of meditation and worry, extended and gathering strength. “They’re telling us it’s for our safety / When it’s really to enslave.”

Morrison’s rebellious sermon continues: “No more government overreach / No more fascist police / Disturbing our peace / No more taking our freedom and our God-given rights,” and it sounds inspired. The gospel piano and organ juking strike a universal chord, furthered by Morrison’s distinctive moan, the sound of meditation and worry, extended and gathering strength. “They’re telling us it’s for our safety / When it’s really to enslave.”

Only modern Bolsheviks and Jacobins, those media-influenced dupes who confuse their frightened social compliance with social good (as with those 7 p.m. shelter-in-place noisemakers who delude themselves that they are cheering-on essential workers) could resist Morrison’s passion or ignore his entreaty: “Who’s running our country? / Who’s running our world? / Examine it closely and watch it unfurl.”

Rolling Stone magazine quotes Northern Ireland health minister Robin Swann’s complaint: “That sort of messaging is dangerous.” This translates as “Thinking for yourself is a danger to my authority.” Morrison makes you wonder: What’s up with all those pop stars who no longer dare to challenge authority? Morrison wasn’t part of England’s punk movement, but these songs are audacious acts of civil disobedience, as when President Trump, upon returning from coronavirus treatment at Walter Reed, strode onto a White House balcony, ripped off his COVID mask, and smiled for the cameras — a gesture that critic John Demetry aptly described with, “That’s punk rock.”

But Morrison goes bluesy, soulful, and folky — the three modes of pop-music woe, depth, and empathy, precise measurements of the consciousness and voices silenced by COVID madness.

On “As I Walked Out,” Morrison details, “All the streets were empty / they spread fear and loathing and no hope for the future /. . . why are we not being told the truth?” — borrowing the sound of an old Gaelic ballad. “Media outlets and their government lackeys . . . / Why are they working, and why are we not?” That unrhymed couplet has got to rile folk-music Commies who have forsaken their old convictions.

On “Born to Be Free” Morrison reminds us of ancient virtues: “The new normal is not normal / It’s no kind of normal at all. / Everyone seems to have amnesia / Just trying to remember the Berlin Wall.” It must surely shake up all those Marxist-identified, Frankfurt School rock critics to see Morrison subvert the hegemony of leftist rock criticism and mainstream journalism. (He revives the brilliant reproach in the prediction, by the Sex Pistols’ Johnny Rotten, of a “cheap holiday in other people’s misery.”) When Morrison sings “Some kind of new i-deology or new psychology / But it’s not for the benefit of you and me,” he takes back the folk song, the soul song, the pop song, which has been stolen by mainstream establishment lackeys. This lovely track recalls the profundity of “Into the Mystic.” (I looked at a live 1974 Musik Laden performance of that song on YouTube to see if that was a tear beneath Morrison’s eye and then realized it wasn’t, but I was misty.)

Morrison’s folk music of the future is rooted in now, despite the social-media slams, a childish slap-back, typical of Silicon Valley petulance, longing for socialist-controlled behavior rather than freedom of speech, thought, and art. While the media mob no longer calls for unity or healing, Morrison’s songs do exactly that.

Morrison is the first pop artist to show cognizance of COVID reality. Instead of sappy brotherhood sentiments that pretend superficial racial awareness, Morrison stands against the media’s platitudes and fake altruism — that we are not “going through this together” but are going through this simultaneously. Those who object, reject reality. 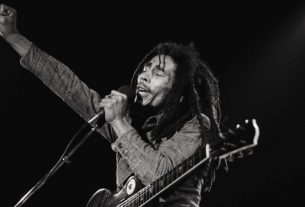