By Lauren O’Neil
Published in Blog TO

It’s been more than two months now since restaurants, cafes, gyms, salons, small retail stores and other businesses deemed “non-essential” were shut down (again) in Toronto, fully or partially, by order of the province.

Employers, employees and entire communities are hurting, if not losing everything, from their jobs to their homes to their lives, as the COVID-19 pandemic drags on — and frustrations with ongoing lockdown orders are starting to boil over.

With nothing left to lose and a supportive network of likeminded entrepreneurs at their side, at least 250 business owners across Canada plan to reopen on February 11 in defiance of their respective governments.

You can find a directory of those who’ve already chosen to go public with their intentions at WeAreAllEssential.ca, the digital hub of a group that includes Adamson Barbecue owner Adam Skelley, who himself famously reopened his Etobicoke restaurant (and got arrested for it) in November.

“Together we can end the lockdowns,” reads a flyer promoting the organized day of action. “February 11, Canada reopens.” 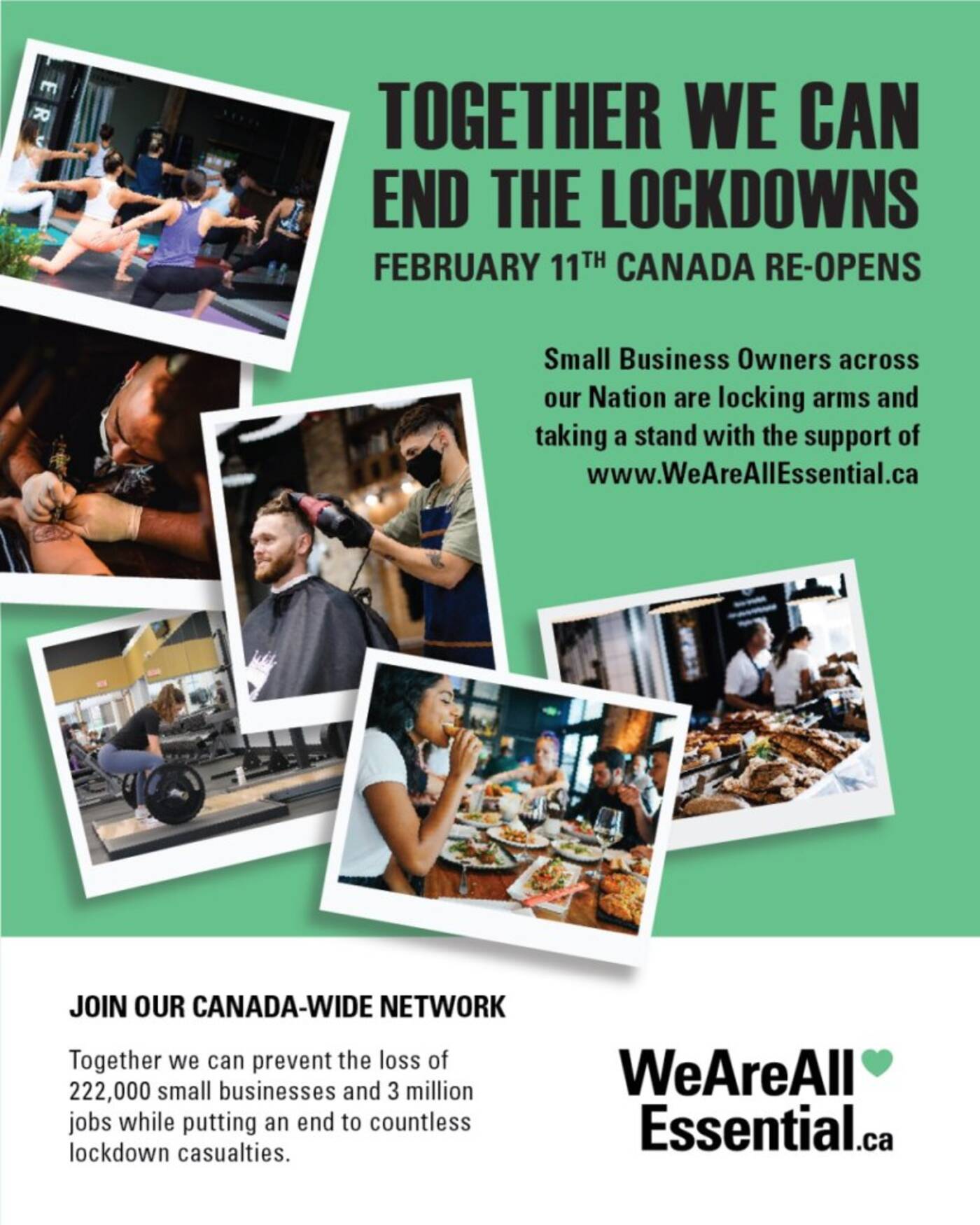 The founder of WeAreAllEssential.ca describes the group as a “nationwide alliance of businesses.” Image via weareessential.ca.

While Ontario’s current State of Emergency and stay-at-home order are set to expire on February 9, it’s quite possible that both will be renewed again.

Even if they aren’t, Ontario Chief Medical Officer of Health Dr. David Williams has made it clear that lockdown restrictions won’t be lifted until ICU numbers drop by half and daily cases start coming in below the 1,000 mark again.

Many business owners aren’t content (or in a financial position) to wait for that to happen, says Vladislav Sobolev, founder of We Are All Essential and the notorious anti-lockdown group Hugs Over Masks.

“We had over 10,000 restaurants close across Canada since last March,” said Sobolev to blogTO in a Zoom call on Tuesday, noting that financial supports from government programs haven’t been enough to offset business expenditures for many restaurants in major cities.

“The hospitality industry is one of the largest employers for people, and when those restaurants disappear, those jobs do too,” he continued. “Small businesses are the fabric of a community. Gyms, yoga studios, cafes, mom and pop stores, barber shops — taxes from small businesses actually pay for the services people use.”

Sobolev, who himself worked in Toronto’s hospitality sector for more than a decade as a bartender and server at establishments such as Mark McEwan’s, Sassafraz and the former Trump hotel, started speaking out against lockdown restrictions back in May.

“This has been almost double a full time job since I joined my very first lockdown protest at Queen’s Park,” said the personal trainer and health coach. “I haven’t missed a single protest — every single weekend, I go to protests, I travel across Canada talking to business owners.”

Bolstered by support for the anti-lockdown movement and people like Skelly and Chris Sky, Sobolev started WeAreEssential.ca as “a support network for all small businesses that are not allowed to operate right now, either fully or under restrictions.”

The idea, says Sobolev, was to create something like a Yelp directory for businesses choosing to stay open despite pandemic closure orders.

Businesses listed in the directory for Toronto include several wellness spaces, a gym, a hair salon, a laser clinic and a restaurant. More are expected to be revealed next week. Image via WeAreAllEssential.

Some 250 owners have joined so far, most of them in Ontario, but not all are publicly listed on the site; Ten businesses, one of which is Adamson Barbecue, are currently listed in the Toronto area. Organizers say the actual number of participants is higher.

“We provide support to businesses at whichever level they choose to exist on our platform,” says Sobolev, explaining that participants have the option to stay private for now while still accessing resources and advice from others in similar situations.

That privacy will be forfeited by all members of the alliance on February 11, however, when they join together and open the doors to their businesses in unison.

If they aren’t already open, that is: Many businesses in the directory (about 100, says Sobolev) are currently operating in defiance of pandemic lockdown orders, some of them using creative strategies, others simply choosing to rack up fines and fight them later in court.

“Please treat these fines as a parking ticket,” he said when asked what he’d say to owners in that situation. “It probably has less power than a parking ticket — it’s an administrative fine — you can just choose option 3, file it to court, and carry about your business, like a parking ticket.”

This is one of many pieces of questionable advice being shared between those in the WeAreAllEssential network, all of whom believe that the government is imposing unjustified restrictions on small businesses without solid data to support their heavy-handed lockdown rules.

These views have been criticized by public health officials, government leaders and members of the public as everything from anti-science to conspiratorial in recent months.

“The government is doing whatever they can to intimidate and slow us down, but you cannot slow the people down,” says Sobolev. “They don’t have a legal framework to follow. Whenever the government tries to use monetary punishment, it’s designed for people who cannot afford it.”

Therefore, he says, these fines are only threats to the middle class — not to, say, politicians who’ve been travelling against public health guidelines or still-operating big box stores like Costco and Walmart. 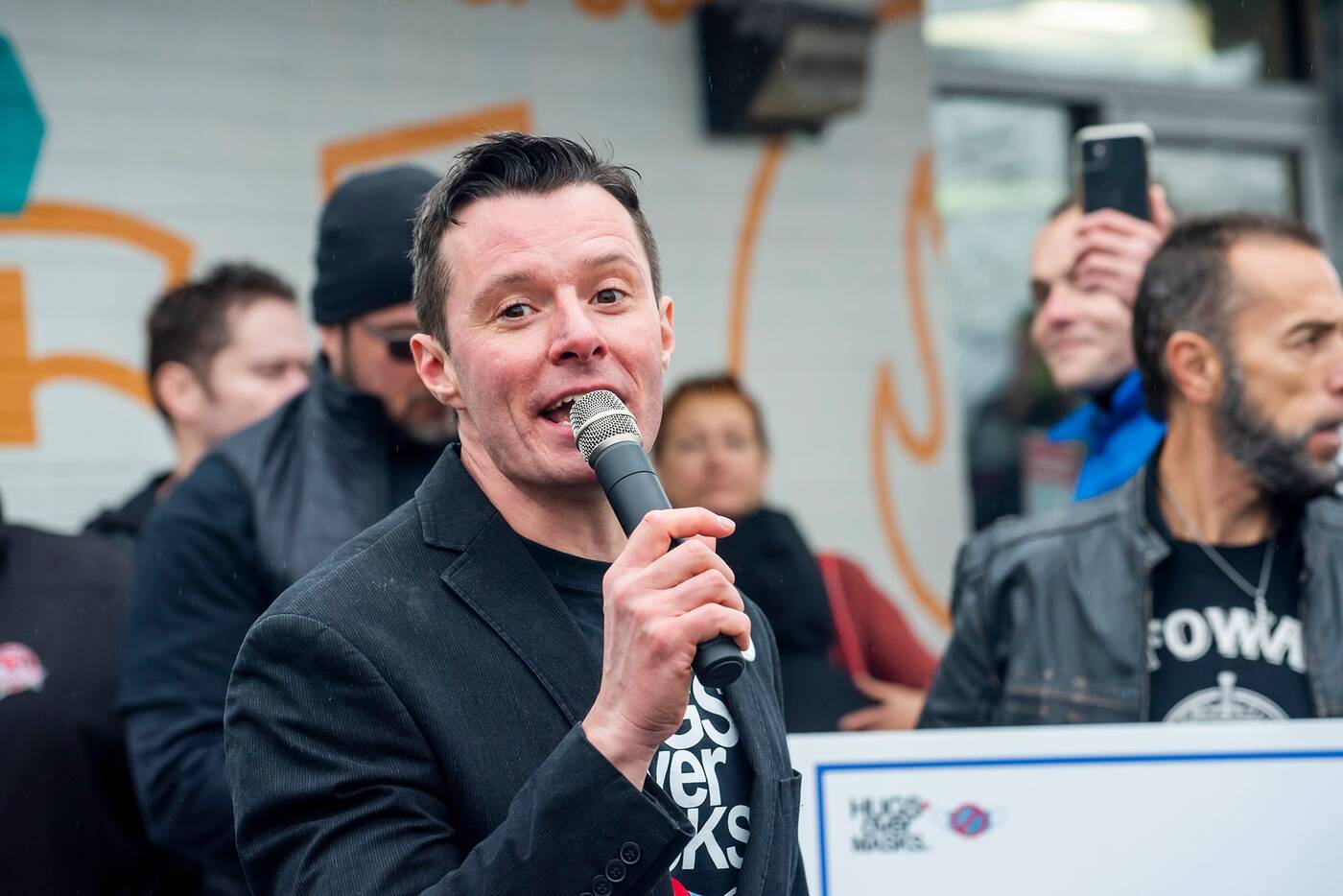 Sobolev’s worries go beyond the loss of small businesses and jobs, too — he worries that the government may be intentionally trying to dismantle the small business class, similar to what once happened in the Soviet Union, where he was born.

“You had no private property, people were forced to do certain jobs, very little freedom,” he said of the time before the revolutions of the late 80s and early 90s, noting similar phenomena in Venezuela and Eastern Europe.

“Business owners are independent free thinkers who live to be in charge of their own lives. Risk takers who question the status quo,” said Sobolev.

“What’s the best way to silence those people? Economically oppress them. It’s been happening in history over and over again.”

“When a business is chosing to stay open it’s a selfless act,” says the trainer-turned-activist. “Choosing to stay open, taking the risk, for themselves, for their employees and for their entire communities Us regular people are put in a position at this point where we have nothing to lose.”

And in the words of James Baldwin, a man who has nothing to lose is “the most dangerous creation of any society.”

The Rockefeller Foundation: Scenarios for the Future of Technology and International Development