This manual addresses I/R [Internment and Resettlement] operations across the spectrum of conflict, specifically the doctrinal paradigm shift from traditional enemy prisoner of war (EPW) operations to the broader and more inclusive requirements of detainee operations.

I/R operations facilitate the ability to conduct rapid and decisive combat operations; deter, mitigate, and defeat threats to populations that may result in conflict; reverse conditions of human suffering; and build the capacity of a foreign government to effectively care for and govern its population. This includes capabilities to conduct shaping operations across the spectrum of military operations to mitigate and defeat the underlying conditions for conflict and counter the core motivations that result in support to criminal, terrorist, insurgent, and other destabilizing groups. I/R operations also include the daily incarceration of U.S. military prisoners at facilities throughout the world.

This manual continues the evolution of the I/R function to support the changing nature of OEs. In light of persistent armed conflict and social turmoil throughout the world, the effects on populations remain a compelling issue. The world population will increase from 6 billion to 9 billion in the next two decades, with 95 percent of the growth occurring in the developing world. By 2030, 60 percent of the world’s population will live in urban areas. Coexisting demographically and ethnically,  diverse societies will aggressively compete for limited resources.

Typically, overpopulated third world societies suffer from a lack of legitimate and effective enforcement mechanisms, which is generally accepted as one of the cornerstones of a stable society. Stability within a population may eliminate the need for direct military intervention. The goal of military police conducting detainee operations is to provide stability within the population, its institutions, and its infrastructure. In this rapidly changing and dynamic strategic environment, U.S. forces will compete with local populations for the same space, routes, and resources. The modular force’s ability to positively influence and shape the opinions, attitudes, and behaviors of select populations is critical to tactical, operational, and strategic success.

An adaptive enemy will manipulate populations that are hostile to U.S. intent by instigating mass civil disobedience, directing criminal activity, masking their operations in urban and other complex terrain,
maintaining an indistinguishable presence through cultural anonymity, and actively seeking the traditional sanctuary of protected areas as defined by the rules of land warfare. Such actions will facilitate the dispersal of threat forces, negate technological overmatches, and degrade targeting opportunities. Commanders will use technology and conduct police intelligence operations to influence and control populations, evacuate detainees and, conclusively, transition rehabilitative and reconciliation operations to other functional agencies. The combat identification of friend, foe, or neutral is used to differentiate combatants from noncombatants and friendly forces from threat forces.

1-10. A CI is a civilian who is interned during armed conflict, occupation, or other military operation for security reasons, for protection, or because he or she committed an offense against the detaining power. (JP 3-63) CIs, unless they have committed acts for which they are considered unlawful combatants, generally qualify for protected status according to the GC, which also establishes procedures that must be observedwhen depriving such civilians of their liberty. CIs are to be accommodated separately from EPWs and persons deprived of liberty for any other reason.

Note. If protected persons are detained as spies or saboteurs or are suspected of or engaged in activities hostile to the security of the state or occupying power, they may be interned or imprisoned. In such cases, they retain their status as a protected person and are granted the full rights and privileges of protected persons.

1-19. The term dislocated civilian is a broad term that includes a displaced person, an evacuee, an expellee, an internally displaced person, a migrant, a refugee, or a stateless person. (JP 3-57) DCs are individuals who leave their homes for various reasons, such as an armed conflict or a natural disaster, and whose movement and physical presence can hinder military operations. They most likely require some degree of aid, such as medicine, food, shelter, or clothing. DCs may not be native to the area or to the country in which they reside. (See chapter 10.) The following DC subcategories are also defined in JP 3-57:

AGENCIES CONCERNED WITH INTERNMENT AND RESETTLEMENT

1-42. There are also numerous private relief organizations, foreign and domestic, that will likely be involved in the humanitarian aspects of I/R operations. Likewise, the news media normally provides extensive coverage of I/R operations. Adding to the complexity of these operations is the fact that DOD is often not the lead agency. For instance, the DOD could be tasked in a supporting role, with the Department of State or some other agency in the lead. (See appendix E.)

2-39. Civil support is the DOD support to U.S. civil authorities for domestic emergencies, and for designated law enforcement and other activities. (JP 3-28) Civil support includes operations that address the consequences of natural or man-made disasters, accidents, terrorist attacks and incidents in the U.S. and its territories.

2-40. The I/R tasks performed in support of civil support operations are similar to those during combat operations, but the techniques and procedures are modified based on the special OE associated with operating within U.S. territory and according to the categories of individuals (primarily DCs) to be housed in I/R facilities. During long-term I/R operations, state and federal agencies will operate within and around I/R facilities within the scope of their capabilities and identified role. Military police commanders must closely coordinate and synchronize their efforts with them especially in cases where civil authority and capabilities have broken down or been destroyed.

3-56. The PSYOP team also supports the military police custodial mission in the I/R facility. The team—

4-33. Upon capture, Soldiers must process detainees using the “search, silence, segregate, speed, safeguard, and tag (5 Ss and T)” technique. This technique provides a structure to guide Soldiers in conducting detainee operations until they transfer custody of detainees to another authority or location. Complete the “5 Ss and T” technique as follows:

6-8. When constructing a facility, planning considerations may include, but are not limited to—

6-9. The facility layout depends on the nature of the operation, terrain, building materials, and HN support. Each facility should contain— 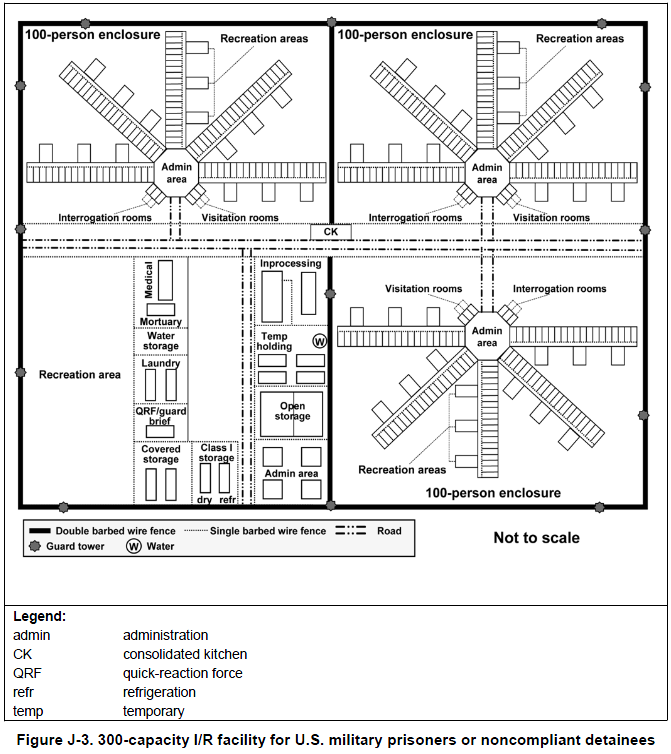 The Inside Story of How Alexey Navalny Uncovered Putin’s $1.3 Billion Palace

The power, potential and peril of the GameStop affair

The Vaccines, The Plunder, and the Arrival of the Great Reset