We’ve been activists in one guise or another for more decades than we care to remember. The ongoing and still evolving COVID-19 crisis is shaping up to be the most significant and seismic event we’ve experienced. In a situation like this, it can be all too easy to allow yourself to be sucked into the day to day passage of events and in trying to deal with and process them as best as you can, to not take a few steps back and try to see the bigger picture. A 24/7 bombardment of news (or what passes for news), opinion, speculation, rumours and a fair few outright lies from a range of news, comment and social media platforms makes the job of trying to isolate some signal from the cacophony of noise a difficult task.

We’ve done our level best to analyse the COVID-19 crisis with an open mind. If you take a look back at the posts we’ve written about the crisis since it started to hit in early March, it’s pretty clear that our thinking has evolved since that early point. In a dynamic, fast moving situation, having a rigid mindset and refusing to alter that will undermine any serious attempt to understand what’s happening, let alone devise the strategy and tactics needed to deal with what you’re facing.

In the early part of March, we took the attitude that in light of what we knew at the time about COVID-19, a sensible response was some form of lockdown and a degree of self isolation. This was seen as a reasonable precaution to take while we took stock of the situation, with the intention of allowing our analysis, strategy and tactics to evolve as our understanding improved. We actually withdrew from participating in an event in March because we were concerned about the possibility of contracting the virus in what was a confined and busy environment. Knowing what we know now, would we have made the same decision? No, we most likely would have concluded that attending didn’t carry any significant risk and would have participated in the event. However, based on what we knew at that point in early March, withdrawing from the event seemed to be the right decision to make. 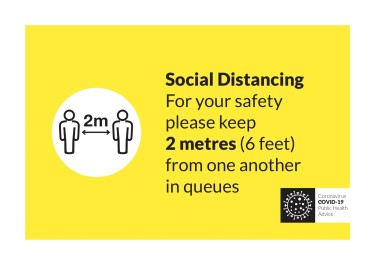 The major factor that made us change our thinking about the crisis has been the response of not just the UK government, but pretty much all governments across the globe, in dealing with the coronavirus. Speaking from our personal experience, we’re over two months into an unprecedented level of restrictions on who we can associate with, how and where we shop, where we can go to get some fresh air and for us as non-drivers, on (not) using public transport. We’re now at the launch of the app for our phones that will alert us if we’ve been in contact with anyone who has COVID-19 and then, we’ll be pretty much told to self isolate for fourteen days. As an aside, from what is admittedly the social and political bubble we inhabit, the demand for cheap and cheerful burner phones will be soaring over the next few weeks from people who rightly don’t want to be tracked and monitored 24/7.

Faced with all of this, it would be negligent of us to not do our level best to draw attention to what’s going on and to prompt people to start asking the questions that need to be asked about why we are where we are. The problem is that as soon as you start to do this, the accusations of ‘conspiracy theory’ start flying around. Some of those accusations have come from so called ‘anarchists’ who we hoped would have know better. That is most likely down to many of them having been taken in by the relentless barrage of what we would term as ‘fear porn’ we’ve been subjected to for the last few months. A barrage that is a form of psychological warfare, also known more colloquially as psyops.

Fear is an amazing tool for securing compliance from the populace for whatever nefarious aims the government of the day and their corporate backers may have in mind. After two months of ‘stay two metres away’ from any other human, the constant pavement dancing needed to adhere to this, interacting with masked up retail staff through plastic screens, seeing plans for school re-openings that will see kids physically kept apart from their peers, it should be all too clear we’re being conditioned to fear each other. As we’ve written before, what makes us truly human with the need for face to face and physical contact is being torn away from us as we’re reduced to atomised, fearful and increasingly easier to control individuals ever more reliant on authority to guide us through the ‘crisis’.

The problem is the number of political activists we know who we thought would have known better, yet have been taken in by this climate of fear. Once you succumb to this fear, it’s harder to take a few steps back and try to form an objective assessment of what’s going on. As well as what we’ve touched upon above, what is also going on is what seems to be a profound reformulation of political and social divides. The labels left and right are starting to become less relevant. What is starting to emerge in the ongoing confusion and chaos is a divide between those of us who value personal and collective autonomy at the grassroots on the one hand and on the other, those who look to the state to provide ‘solutions’ to problems, regardless of how totalitarian those ‘solutions’ may turn out to be. The point is that those who are willing to trade their freedoms for what is an illusion of safety will end up with neither.

As old political definitions and divides become redundant while new ones emerge, we’ll find ourselves with some strange bedfellows. Some may end up as firm allies, some may eventually end up as opponents or enemies. The point is that we have to remain open minded and flexible during this ever evolving and often confusing situation. We’re not always going to get it right and yes, if we get through this, in a few years time we may well look back and ask ourselves why the heck did we align ourselves with these particular people?!

To come to some kind of conclusion, given that our personal and collective autonomy is on the line, it’s better to remain open minded and willing to experiment with new alliances. A rigid adherence to a particular line, a refusal to countenance new alliances and condemnation of those of us who are open minded and willing to experiment will inadvertently usher in a techno totalitarian future where we’ll merely exist as opposed to living a full life. A caveat… Pieces like this are a snapshot in a dynamic, constantly evolving and often, confusing situation. Some of these may survive the test of time, some most definitely won’t. As ever, constructive criticism and comradely debate are welcome. Abuse and accusations of ‘conspiracy theory’ will be neither welcomed or tolerated so basically, if that’s all you can manage, don’t bother!

On the Anarchist Response to the Global Pandemic

Switzerland holding referendum on power of government to impose lockdowns